Is ‘Microscheduling’ set to be a key service industry buzzword for 2021?

Right now the words ‘how can we cut costs?’ aren’t far from the top of most boardroom agendas and it’s a message that’s filtering down through all departments and all levels of management.

In the contact centre, we’re no strangers to requests to cut costs. Except that it usually carries a caveat. The question is usually ‘how can you cut costs but not affect quality?’. Well maybe now there’s an answer.

Organisations that adopted homeworking during lockdown mainly did so out of necessity. Moving forward though, there’s a case for switching to homeworking to save cost.

There are several areas where homeworking can help cut operating costs. First, there is the obvious one: lower property and running costs. Contact centres are generally expensive to build & equip as well as to operate. Second, there are potential savings from greater efficiency & higher productivity – and there’s plenty of research evidence to support this claim*. Third, there are potential savings from adopting Bring your Own Device and Bring Your Own Broadband schemes that are commonly used within homeworking operations. The fourth and final area is just as compelling as any of the above. It is through more efficient resource scheduling. Or what in homeworking circles is often called Microscheduling.

One major UK financial services company believes that running HomeAgents is around 30% cheaper than its in-house contact centre, with Microscheduling responsible for the majority of that saving.

So what is Microscheduling? Well let’s start with a typical daily customer demand curve for a Bricks & Mortar centre. On the x axis, we’ve represented time during the day in 30 min segments, and on the y axis expected contact volumes, (represented by the number of advisors required to handle those volumes): 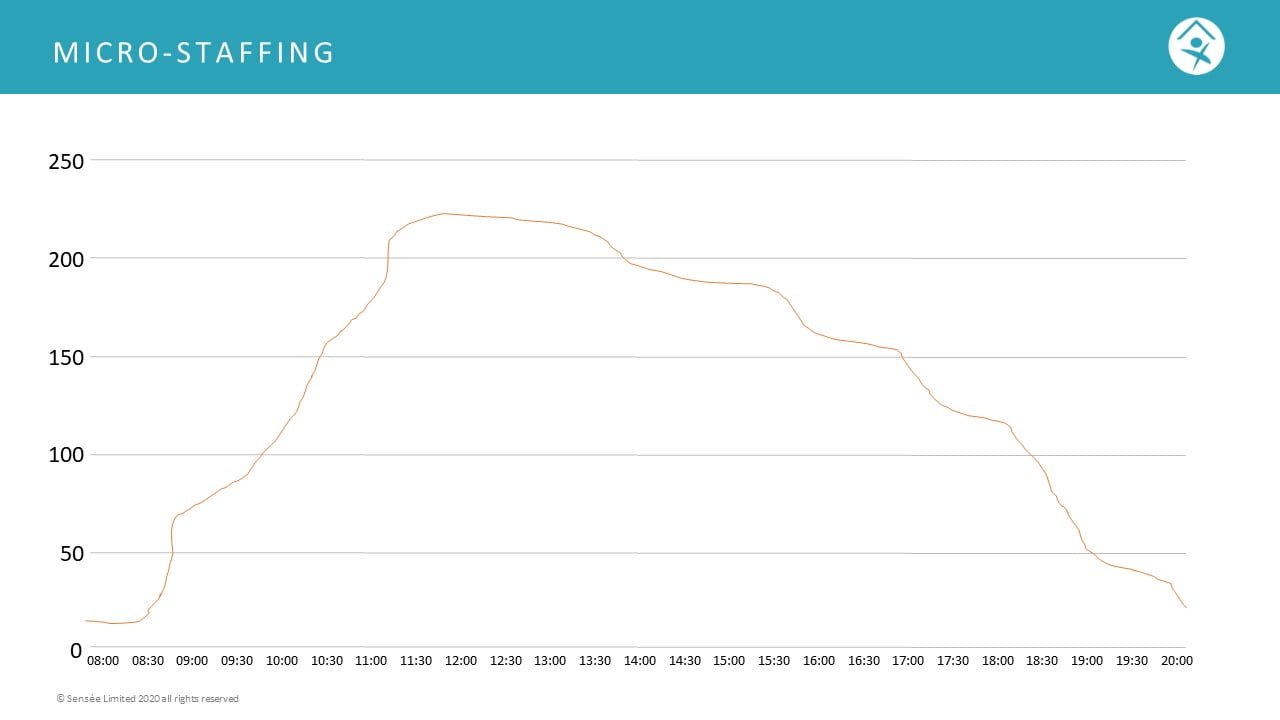 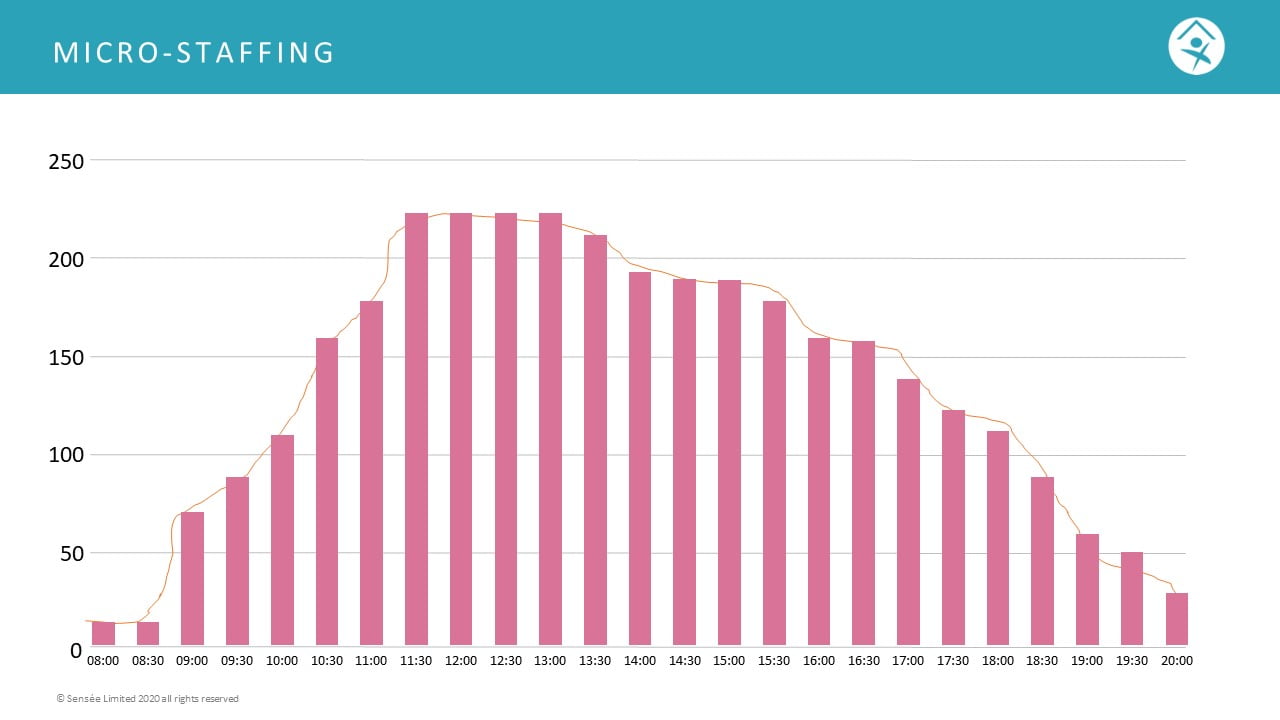 Should the contact centre staff-up to meet expected levels of demand at every 30 min interval they would end up with something like Fig 2. However that is clearly not feasible. Businesses can’t ask their employees to work for 30 mins, go away for a couple of hours, and then start work again. 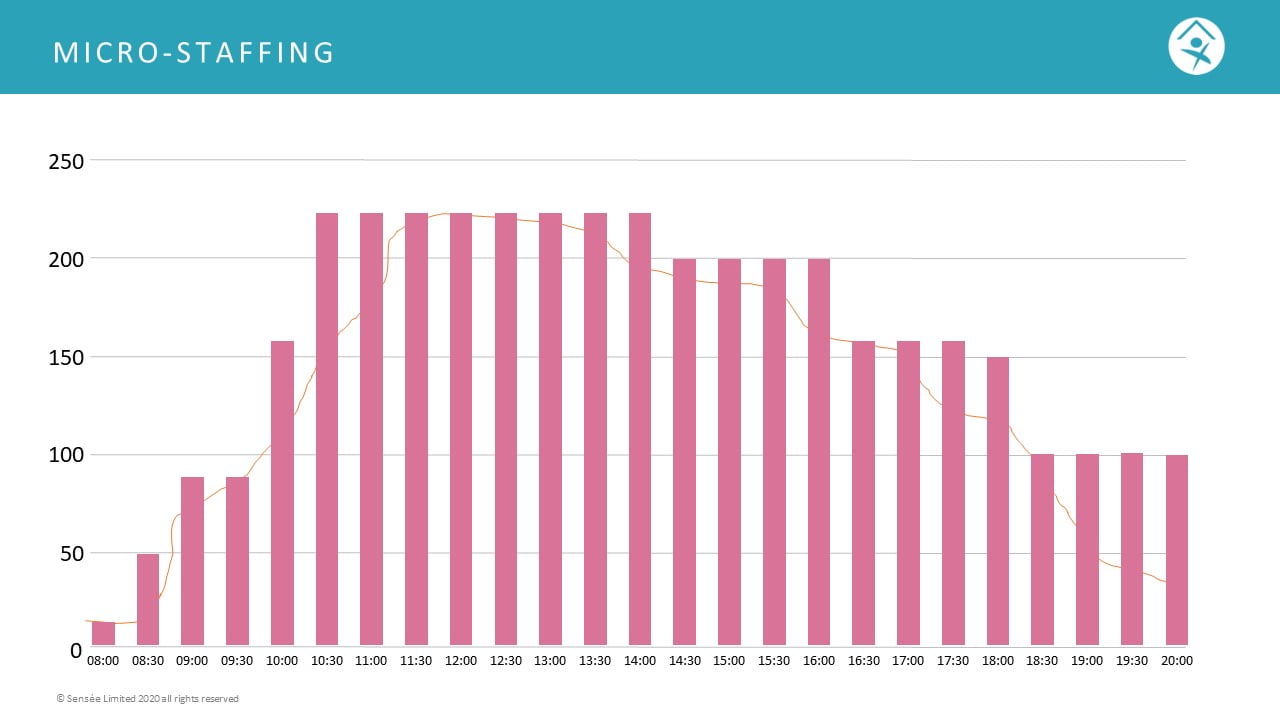 Fig 3: Reach for Every Peak

So what can it do? The company could ask people to work shorter shifts to meet all demand peaks, and provide some flexibility, but it would end up with something like Fig 3. And clearly that’s not resource efficient at all.

An increasingly popular scheduling approach – and one that’s made possible through new resourcing technologies and models that support Microscheduling – is this.

Rather than staff up to meet all demand, the Bricks & Mortar contact centre merely needs to staff up to meet ‘core’ requirements in a manner that is acceptable for the operation and its people (Fig 4)… 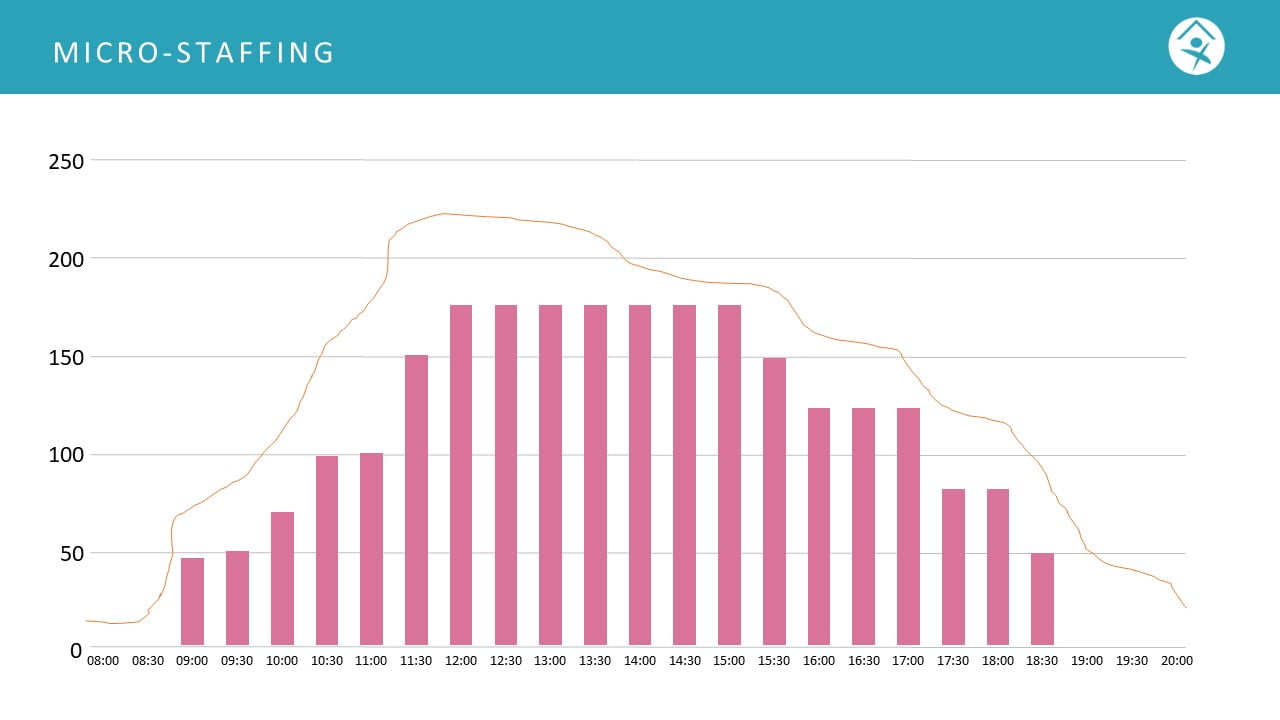 … with the ‘gap’ then filled by homeworkers working on flexible and split shifts as illustrated in Fig 5. 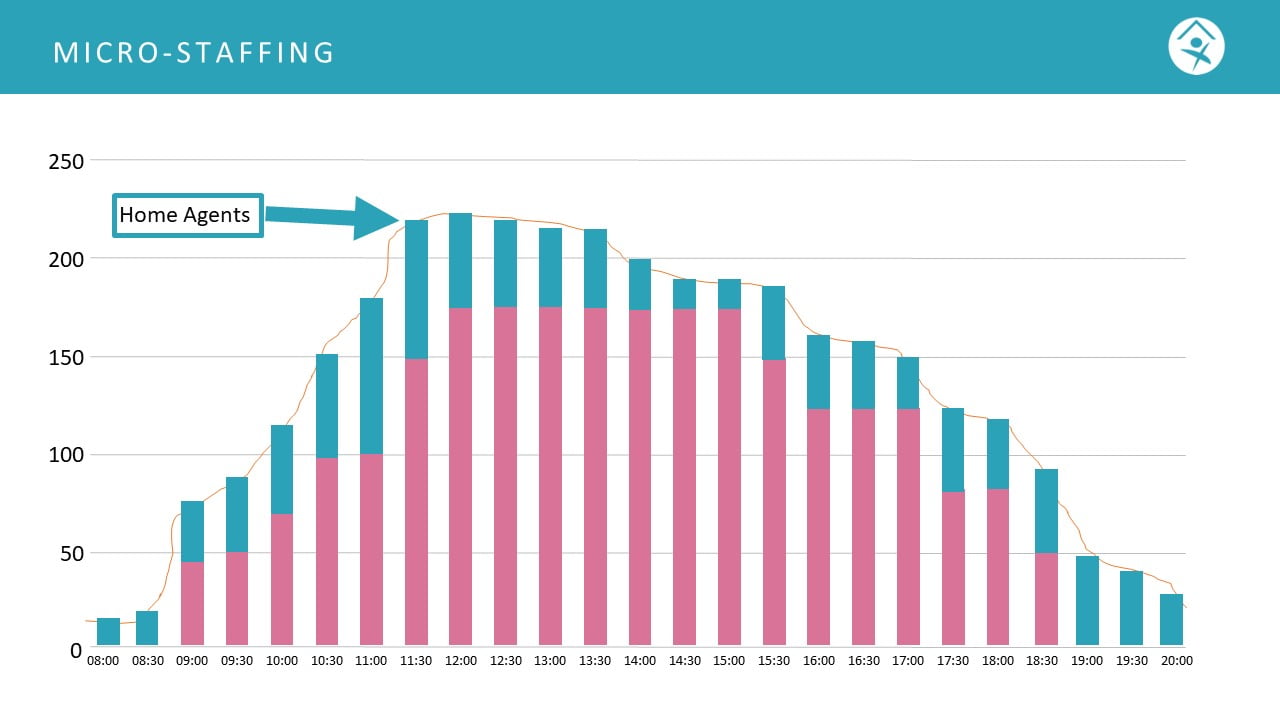 Microscheduling can be a highly efficient model for large contact centre operators that have a Bricks and Mortar centre (or centres) and also employ their own homeworkers. It can also be extremely effective for smaller centres that use homeworkers supplied via a third party organisation.

The key is to employ homeworkers on flexible working contracts. If your homeworkers work 9 till 5 then the Microscheduling model isn’t going to work. However if you have the technology tools and processes to allow homeworkers to self-schedule on shorter shifts throughout the day – for example in one to five hour bursts – it’s possible to build workday schedules that very closely match expected demand. And if you have unexpected demand peaks then the model will give you access to extra resources to meet that demand at much shorter notice (i.e. because people don’t need to make their way into the office).

Flexible working, especially with split shifts and self-selection, will be a radical change for many businesses. However, it is exactly what many people are now demanding, together with the ability to live where they want and still carry on doing their jobs as before. Homeworking isn’t for everybody but for many who are prepared to sacrifice the advantages of working in the office for the many advantages of working from home, it can mean significant cost savings and a much improved work life balance.

Please use the button below to download your report.

Click here to return to the main Research page.

For details on membership packages and benefits click here.

Join today and get immediate access to member benefits.

Stay close to the CCMA by signing up today and find out about ...